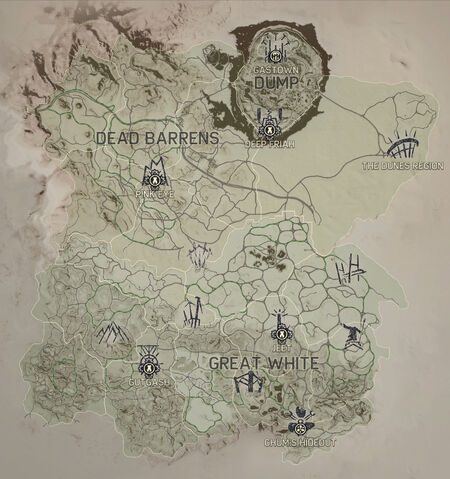 Basic Tips for Getting Started and finding Locations within the world of Mad Max.

To uncover every Location or Regions on The Map, you can either just drive around The Wasteland or unlock them by fulfilling certain tasks. Bare in mind, that at the time this guide was written, the in-game map is still flawed and will not show some locations, even if you found them. They vanish randomly and only a restart of the game may let them show up again. My best guess is that there is a limit of items that can be shown at all times on the map thus making the map a bit unreliable at this moment. Below are some of the most important locations and how the marker works on your in-game map.[1]

For a more in depth look visit: Vantage Points.

are marked as little balloons on your map. You'll probably encounter the first one after you completed Chumbucket's tutorial and while you are on your way to Jeet's stronghold. They become visible on your map as soon as you enter a new region. Visit the Balloons to capture the Vantage point, which will make it a Fast Travel point, as well as give you an overview of the entire Region which you can then use your Binoculars to unlock additional Locations as well as Threat Locations. 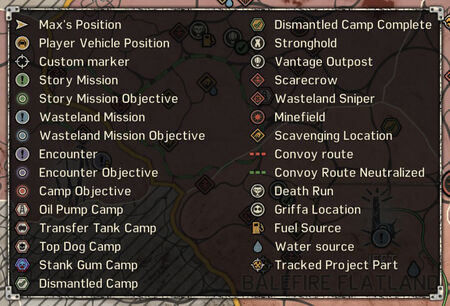 Lowering the Threat in a Region will reduce the number of Scrotus patrols in that region. For a deeper look visit: Threats

are marked by yellow diamond-shaped symbols with a hand. You'll uncover a lot of them just by driving around The Wasteland. They will also provide information about the Scrap

or Loot you can find there as soon as they appear on your map. Every stronghold provides a Project for a "Survey Crew". This will, once you complete the project, provide you with The Map entry of every Scavenging Location in the Character's territory.

Finding all the parts to build Project Parts

isn't overly hard, since you can go to the stronghold project and mark the locations of every project-part on your map. An additional handful of scavenging locations will become available only after you've accepted certain Wasteland Missions from Characters. You won't need Region Maps to find every scavenging location, but feel free to use them as a possibility to play at your preferred speed.

are not limited to racing. Complete Death Runs to unlock refueling station and Fast Travel points.

are the racing tracks in the game. There is a racing track in nearly every single Regions which can be uncovered while using a balloon in their corresponding regions.

The Wasteland is not empty. Interact with Wastelanders to gain Information, Loot or Griffa Tokens

There are a few different types of Encounters

which you'll need to fulfill the Legend - Challenges. More often than not, they are just short cut-scenes and most of them only show up at a certain point during the story.

Information Encounters: Usually linked to an enemy Camp and will provide Intel on how to conquer them easier. They vanish after you take over their corresponding camp.

Buzzard Encounters: Fight through and set off a bomb in these underground lairs to reduce the Buzzard Enemies from the Region

Legend Encounters: Use the ramps in The Great White to perform an epic jump which will unlock a specific Challenge reward you with a Griffa Token

Keep in mind that some of these encounters only appear for a certain amount of time or at a certain point during a story mission and disappear afterwards, so if you see an Encounter and want to complete it, go for it ASAP!

and provide shelter for Max.

There are all sorts of various Camps

throughout The Wasteland. Each camp has Camp Perimeters Defenses, which will protect the camp from intruders. Find and talk with Wastelanders to gain Intel into the camps to find out hidden and secret entrances or other info to help you defeat the Enemies inside.

Top Dog Camps: The most feared camps outside Gastown! These fortifications oversee the network of oil camps for Scrotus, and are heavily defended both inside and out. Defeat the Top Dog from each camp to get his War Paint.

Oil Pump Camps: These camps drill for crude oil which fuels Scrotus' refinery in Gastown. Destroy the Pump to obliterate the camp.

Transfer Tank Camp: Transfer Tanks Camps are holding grounds and storage for the Oil Pump Camps. Blow up the tanks to clean up the camp.

Stank Gum Camp: Don't let the colorful markings on the walls fool you! Stank Gum is a very powerful and twisted individual. He and his crew terrorize the people of The Wasteland. Destroy everyone in the camp to lower Scrotus' threat in the area.
Additional Camps: