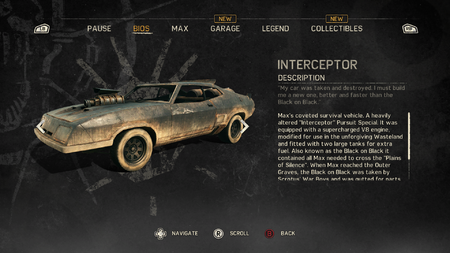 "My car was taken and destroyed. I must build me a new one, better and faster than the Black on Black."

The Interceptor was a heavily-modified Ford Falcon XB Coupe that belonged to Max Rockatansky. It was often referred to as the "Black on Black", due to its pre-apocalypse paint scheme: a menacing gloss black over a satin black.

"Max's coveted survival vehicle. A heavily altered "Interceptor" Pursuit Special. It was equipped with a supercharged V8 engine, modified for use in the unforgiving Wasteland and fitted with two large tanks for extra fuel. Also known as the Black on Black it contained all Max needed to cross the "Plains of Silence". When Max reached the Outer Graves, the Black on Black was taken by Scrotus' War Boys and was gutted for parts

Max, with the help of Chumbucket, had to begin building a new survival machine, more powerful and sturdy than even the original Black on Black."