Back to page
Edit

This article may need cleanup to meet quality standards.
Please help improve this if you can. The Discussion page may contain suggestions.
Reason: "MMFR" 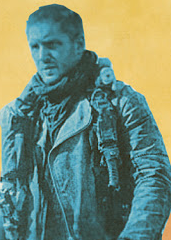 Mad Max: Fury Road is a 2015 post-apocalyptic action film directed and produced by George Miller, and written by Miller, Brendan McCarthy and Nico Lathouris. The fourth installment in the Mad Max franchise, the film is set in a future desert wasteland where gasoline and water are scarce commodities. It follows Max Rockatansky (Tom Hardy), who joins forces with Imperator Furiosa (Charlize Theron) to flee from cult leader Immortan Joe (Hugh Keays-Byrne) and his army in an armored tanker truck, which leads to a lengthy road battle.